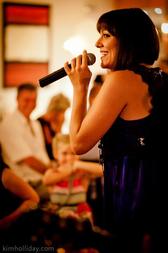 Amelinde didn't want to be a performer until her late teens – even though her family saw it coming from toddler age! They were spot on. With an impressive voice, Amelinde has the gift every great lead singer needs: she genuinely engages with the crowd and gets the party going. Having learned all about music and entertainment from British and Spanish music industry names – John Coletta, Rob Davis, DJ Edu – Amelinde also sings with several professional bands and performs as a solo artist. The Q was born in 2007 from Amelinde's passion for rock and pop. You'll love the way she interprets songs by artists like Adele, Amy Winehouse, Bruno Mars, Michael Jackson, The Killers, Black Eyes Peas, Queen, Kings of Leon, Blondie, U2, The Kinks, Scissor Sisters... just to name a few. Sitting down at The Q's gigs when Amelinde is singing is not an option. You'll have to get up and dance! 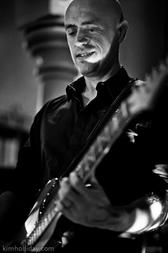 Imagine the spine-chillingly beautiful first notes of Sweet Child of Mine ringing out and the crowd going wild! This is Jose at his best, playing a guitar solo composed by one of his rock heroes. He began playing in the 90's, riding the grunge wave as lead guitarist/shared vocalist with Spanish bands like Bally's Party and Bootsies. Because he started out interpreting music by bands like The Police, The Doors, Pearl Jam and U2, Jose has developed extremely versatile skills on the strings. Then in 2006 he met Amelinde at a jam session and they connected immediately. The Q is now Jose's main musical project, although you can also hear him play with Nightrain, ska and reggae band Looney Toonz, and on original music tracks with local artists. 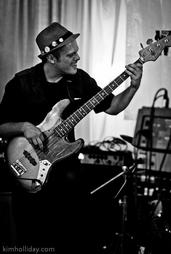 The coolest cat on the block, Pablo provides smooth, funky bass lines for The Q Band. Originally from Buenos Aires, Pablo taught himself to play bass at 13 years of age. Since then he has been a professional musician, starting off with his very own punk rock band, Inertes, which he formed as a teenager in Argentina. In 1998 he joined Los Guapos, a pop/rock group, which became very popular in Argentina and they toured nationally for some time. When he turned 23, Pablo joined a third group called The Keruza, who recorded three albums and two bootlegs, played on the radio and television in Argentina and finally, toured Mexico and the USA for five months. By 2003 the group had become well known in Spain and in 2003 Pablo travelled here for the first time on tour. Things went so well that the band returned to Spain during two consecutive years, and by 2008 Pablo had fallen in love with the country and decided to move here. He now plays bass guitar with several groups, and The Q is fortunate enough to be one of them. 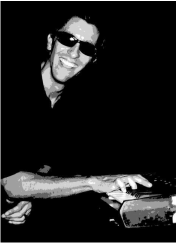 Lucho is the latest member to join the band, combining a great stage presence with a warm, soulful piano sound. Coming from a classical music background, and lots of experience playing with rock and soul bands, means that Lucho can pick up pretty much any tune and play in all imaginable styles. Lucho never tires of learning about music and he is currently studying the higher grades of music theory at the Malaga Music Conservatory. Somehow he still finds time to play with his surf rock band, Mitá i Mitá, and several other bands on the coast. You won't find another pianist as versatile, friendly and professional as Lucho. He never tires of learning new requests for weddings – he has made many a wedding ceremony all the more beautiful with his moving music – and his energy at gigs gets everybody on their feet! 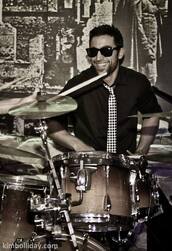 Loren, as well as being The Q's drummer, is the band's soulful artist and improviser. He always thinks out of the box. True to his creative nature and ability to play almost any rhythm known to man.